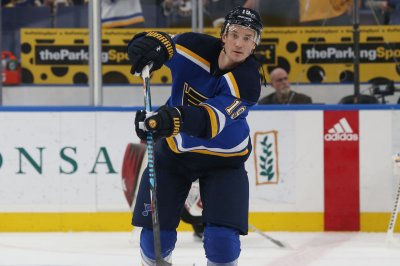 Feb. 12 (UPI) — St. Louis Blues defenseman Jay Bouwmeester had a heart episode and collapsed on the bench during a game against the Anaheim Ducks, forcing the contest to be postponed.

Bouwmeester was stabilized, conscious and alert at a local hospital Tuesday night. Officials stopped the game in the first period at the Honda Center in Anaheim, Calif.

“With 7:50 remaining in the first period of our game [Tuesday], Jay Bouwmeester suffered a cardiac episode and collapsed on our bench after completing his shift,” Doug Armstrong, Blues president of hockey operations and general manager, said in a news release. “Thankfully, with the quick response of our medical trainers, Anaheim medical trainers and their team physicians, they were able to stabilize Jay.

“He was alert and moving all of his extremities as he was transported to UC Irvine Medical Center. Currently, Jay is conscious and alert as he undergoes further testing by Anaheim’s physicians. We will update Jay’s condition on Wednesday morning.”

Bouwmeester, 36, completed a 1:20 shift on the ice before heading to the bench. His teammate Vince Dunn shouted and waved for medical attention after watching Bouwmeester fall. Both teams then went back to their locker rooms before the game was called off.

Bouwmeester signed a one-year, $3.25 million contract with the Blues in April. He joined the franchise during the 2012-13 season and was part of their Stanley Cup winning run last season. The 17-year veteran began his NHL career in 2002 with the Florida Panthers. He also played for the Calgary Flames before joining the Blues.

The Blues said the game against the Ducks will be made up at a later date. St. Louis travels to face the Vegas Golden Knights at 10 p.m. EST Thursday at T-Mobile Arena in Las Vegas.