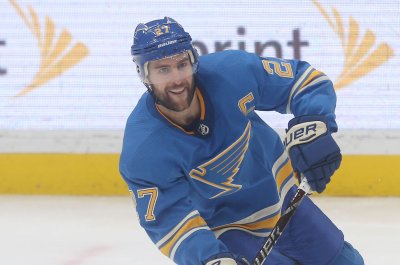 Pietrangelo’s seven-year deal — worth a total of $61.6 million — runs through 2027 and includes a no-movement clause, according to the team. His $8.8 million annual salary-cap hit is the fifth-largest cap hit for a defenseman in the NHL.

Before finalizing Pietrangelo’s contract, the Golden Knights traded defenseman Nate Schmidt to the Vancouver Canucks for a 2022 third-round pick. The move cleared his $5.95 million cap hit off the books and allowed Vegas to fit Pietrangelo under its salary cap.

“When we looked at opportunities to improve our team, we saw a rare opportunity to add an elite player like Alex to our team,” Golden Knights general manager Kelly McCrimmon said in a statement Monday. “For us, we viewed it as a similar opportunity to when we acquired Mark Stone. Generally, these players don’t make it to the market.

“The game, business and job I have requires hard decisions on really good people. I’ve never worked with a finer man in my career than Nate Schmidt. As good a player as Nate is, he’s an even better person.”

The Blues drafted Pietrangelo with the No. 4 overall pick in the 2008 draft. He has only played with St. Louis in his NHL career and helped the team win its first Stanley Cup in 2019. He also served as the Blues’ team captain since 2016.

Pietrangelo’s time with the Blues was effectively over after the organization signed former Boston Bruins defenseman Torey Krug to a seven-year contract last week.

“We had some really good conversations and we just couldn’t get anything done,” said Blues general manager Doug Armstrong, who noted that the team offered Pietrangelo an eight-year extension. “There’s no good or bad person in this. It’s just the business side of it.”

Pietrangelo, 30, had a career-best 16 goals to go with 36 assists in 70 games last season. He added one goal and five assists in nine postseason games.

Pietrangelo has recorded 109 goals and 341 assists in 758 career regular-season games.